When you first heard about Obama’s plan to fundamentally transform America, you probably wondered “into what?” Well, the answer, as many speculated, is a Socialist State. Socialism. And anyone that said that was mocked and ridiculed by the people who were planning to implement it. (See Rule #5 below.) 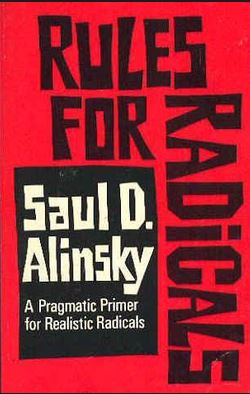 In less than 5 minutes you will know the Progressive’s plan and their tactics. Please take the time, read this and refer to it often. And tell others.

The first is the 8 point plan to implement Socialism. This plan was not enumerated in Alinsky’s book, but Alinsky inspired two Columbia University sociologists Richard Andrew Cloward and Frances Fox Piven to devise the “Cloward-Piven Strategy” which seeks to hasten the fall of capitalism by overloading the government bureaucracy with a flood of impossible demands, thus pushing society into crisis and economic collapse. This strategy is often attributed to Alinsky and left wing websites like Snopes have tried to discredit the plan by declaring it false because Alinsky didn’t actually write the 8 steps in his book. But Snopes conveniently fails to correctly attribute the work to Cloward and Piven.

The second is the 12 “Rules” for implementation of this plan. The tactics or “rules” work equally as well on the left to fight the plan, which is in it’s final stages of implementation.

How to create a socialist state – The Cloward-Piven Strategy:

There are eight levels of control that must be obtained before you are able to create a socialist state.

The first is the most important.

Read more here: Alinsky’s 12 Rules for Radicals, this has the 12 tactics you have seen the Dems employ.

The Dems have been conducting this silent coup over the last hundred or more years. Although they’ve been having trouble with number four, gun control. They just recently let a shooter take out 17 high school students in Florida. CNN has been trying to maximize this event for gun control purposes.

The Dems preach that Islam is a peaceful religion. Nothing could be farther from the truth. Sharia law, the heart of Islam, is in fact a government system. They do it first by establishing mosques in every town and city. These meeting places are perfect warehouses of not only indoctrination but future terrorists, who are made to read and understand the principles of Jihad, martyrdom and Dar-al-Harb (“land of war”-anyplace not Islamized).

Mosques cost money, and the money for these warehouses of hate is coming straight from Saudi Arabia. These mosques are being infused with an activist strain of Islam, Wahhabism. If you have to ask where the Saudis are getting their money, you are not paying attention…it’s coming from you. According to a National Portrait, a survey released in April 2001, there were at least 1,209 mosques in the US, but today it’s estimated that number has quadrupled.

And the Dems don’t want to solve problems. They want to move their  socialist/communist agenda forward via the problems. Basically they create the problem, wait for the citizens to be outraged, and then provide a solution that prolongs the problem and/or makes it worse.

Example: Pres. Trump offered the Democrats two and half times the number of presently registered DACA people. Notice that the MSM/Democrats have dropped the call for DACA. Dems aren’t interested in solving problems. THEY are interested in taking over. Controlling.

In the following video THEY are the Left/Dems and Establishment people.